Do you have leg pain that stretches from the back down to the calf or foot? This may be an inflammation of the sciatic nerve: the sciatica.

The term sciatica means precisely the inflammation of the sciatic nerve, the longest one in the human body which originates from the sacral plexus and innervate, through its branches, the anterior and posterior muscles of thigh and leg. In the most of the cases the pain is propagated mainly in the lower back, on the gluteus or on the rear section of the leg but it can extend across the top – till the hip – or down – to the foot. Inflammation usually manifests only in one leg and may be characterized by pain felt as sharp and unbearable, or be milder, or still, take the form of numbness and tingling in the legs and difficulty in controlling the movements of the lower limbs. 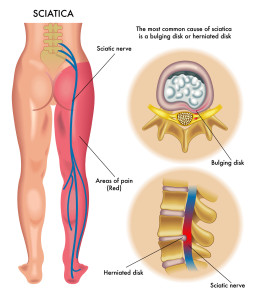 Sciatica can occur often as a result of the slipped disc, in fact it is not rare that, as a consequence of the spilling out of the disc, a nerve root in the lumbar vertebrae is compressed or the vertebrae misalign.

Sciatica can even affect a woman in an advanced state of pregnancy because  uterus can exert a compression of varying extent on the sciatic nerve, so the vertebral muscle tension or the pressure may increase because of the greater weight.

The compression of the sciatic nerve in some cases may be caused by some specific diseases such as lumbar spinal stenosis, piriformis syndrome, spondylolisthesis and spinal tumors.

Long sitting on hard chairs and sleeping in fetal position may favor pathologies of vertebrae that could compress the sciatic nerve.

Sportsmen instead, must pay attention to the stretching of the myofascial area to avoid repercussions on vertebral tissues and must be careful not to press the sciatic nerve.

The treatment of sciatica is closely related to etiology. Sciatic pain, as mentioned, is a symptom due to several causes that you should identify with the help of specific diagnostic tests like: neurography, electromyography, blood tests or imaging tests.

Rest, correction of posture, strengthening of muscles and manipulations to decompresse your muscles and to help relax the nerve are recommended for rehabilitation.
The pain can be sedated with anti-inflammatory and pain medication and / or physiotherapy technologies such as high power laser.

Laser radiation can relieve pain as it interacts with tissues of muscle, skin, ligaments and joints. The effects of the interaction of laser light with the tissue are mainly three:

The high power laser technology, such as Crystal Yag, manages to penetrate in depth, going to stimulate damaged cells promoting a rapid repair of these ones. Thanks to the effects triggered can reduce inflammation and pain quickly.

Laser treatment is painless and, being fast, it can be repeated every day without contraindications.